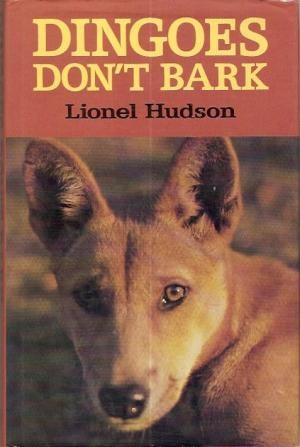 Lionel Hudson wrote Dingoes Don’t Bark in 1974, a time when dingoes were still greatly maligned, considered a noxious pest, to be shot on sight, and illegal to keep as a pet. Although our knowledge about dingoes has improved and many perceptions about this misunderstood Australian animal have improved it is still worth a read.

"Dingoes don't bark, mate. They're flat out just staying alive." While making a film about dingoes Lionel Hudson sought to understand the animal’s history and why it is so maligned and hunted with the aim to have it completely annihilated. To capture his story, he travelled across Australia talking to trappers, dingo fence workers and station owners. He gained more than just images for his documentary. He learned more about the dingo than many who claimed to be experts at the time.

The book clearly describes the situation and plight of the dingo at the time and gives some of its sad history since white settlement including its relationship with Aboriginal people before the impact of that invasion.

He also raises a topic not considered a great deal in the early 1970s; that of the dingo’s role in maintaining the balance in nature. Meeting Robert Harden, who was researching dingoes and kept one at home, gave him further insight into this animal he had come to admire. Many old dingo myths are disproven.

One of the highlights of the story is definitely the story of the aptly named Noxious, a dingo pup he is given and keeps quite illegally.

My rating 5* While Dingoes Don’t Bark was written more than 40 years ago, it is still relevant in understanding this beautiful Australian native animal.
Posted by Random Jottings at 18:07