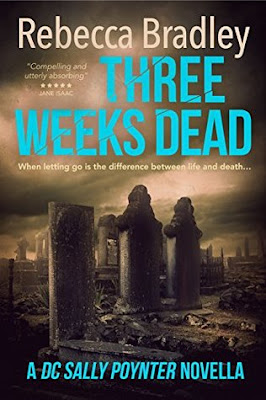 How far would you go if someone took your wife? Especially, if you buried her a week ago. When Jason Wells is faced with this scenario, he is confronted with the prospect of committing a crime that will have far-reaching consequences. Can young get through to him before he crosses that line, or does a desperate husband prove to be the case she won’t ever forget? A prequel novella, set before Shallow Waters, the first in the DI Hannah Robbins series.

I am always looking for a good detective story or, better still, a good series. I chose this novella as an introduction to DI Hannah Robbins who features in the Detective Hannah Robbins Crime Series. (Shallow Waters and Made to be Broken)


I don’t read other reviews (except for scanning the ratings) before selecting/agreeing to a book for review. I did not realise that this story, although a prequel to the series, is about DC Sally Poynter not DI Hannah Robbins. Initially, this was a disappointment to me. After drafting up my review then reading other reviews, I realised that Sally Poynter, as a member of Robbins team, is a character in the two books of the series. Yes, I need to pay more attention in the future.


Having said that, while I didn’t get a strong impression of the main character of the series, I did get an insight into the quality of Ms Bradley’s writing and very much liked what I read. She certainly has imagination and her experience as a police officer brings reality to her story.


The story starts immediately with an unusual crime and moves smoothly and consistently; essential for a novella. It is an absorbing and interesting story line, well-paced, with short chapters and building tension at the end.


The characters are well developed and demonstrate not only good detecting skills but very much life as a police officer.


DC Sally Poynter is the newest team member and wants to show she can do a good job. She has the support of her boss and the other team members with one exception who is a misogynistic bully. She is capable but insecure with a willingness to try hard and learn while trying to balance her marriage.


I felt for Jason Wells, the young man who has recently lost his wife and now finds her body has been stolen. To get her back he has to commit a crime.


My heart went out to Lewis, who was Jason’s wife devoted dog. He is a totally loveable, if four-legged, character in the story. I kept hoping nothing would happen to him. One point that amused me was when Jason explained to Sally why he was named Lewis. He was named after the offsider of Morse from the television series. Sally explains that she doesn’t watch police crime shows because they are not realistic “they never do any paperwork.” It made me smile and wonder if this was a personal view of Ms Bradley’s.


My rating 3*. I will certainly be getting copies of the other two book in the series.
Posted by Random Jottings at 18:28 No comments: