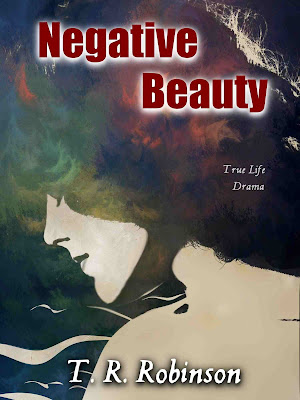 Negative Beauty is the second book of the trilogy memoirs of T R Robinson. The first book, Tears of Innocence began before WWII and told of her initially happy childhood that turned into a tortured and troubled life.


In Negative Beauty she is finally freed of an abusive marriage and with her young son anticipates an easier and happier life.


At the beginning the author is not clear about when this part of her life occurs but based on the end of her first book and later references to the decade it cover the late fifties and sixties; a time when women were expected to be married and dependent on a husband. Attitudes of the day towards a single mother earning a living are just part of her struggles in Negative Beauty.


The title comes from the author’s natural good looks and the difficulties that can arise when people make assumptions. In the authors’ case it included men, lesbians and pimps.


But that’s not all she has to deal with in this period of her life. Her day to day life is frustrated with struggles of making ends meet. Juggling three jobs to make ends meet and provide for her son leads to repeated illness. Her feelings of frustration due to lack of income and doubt about the future trigger several suicide attempts. Her naivety and trusting nature makes her a target for people wanting to harm or take advantage of her.


The writing style is very different to “Tears of Innocence” as it is largely dialogue based, telling her story through conversations and reflection. I have to admit that, at first, I wondered how this would work as a memoir. It does work extremely well and makes the reader feel like they are in the room and part of the scene being played out.


I enjoyed reading Negative Beauty. It is not only an interesting memoir it also give great insight into viewpoints of the time and shows just how much society has moved forward in their attitudes to women.

Negative Beauty is available from: