Tears of Innocence by TR Robinson 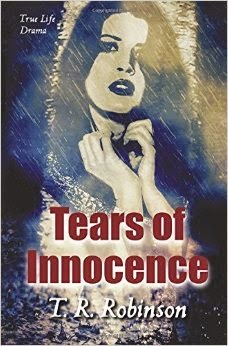 TR Robinson’s story Tears of Innocence begins before the Second World War. Her happy and innocent childhood is shattered following the death of her mother. To add further to her trauma she is kept in ignorance of the event and shunned by family members who believed a child did not need, or could not understand sufficiently, to grieve; as was customary at the time.

Sadly this is only the beginning of her traumatic and troubled life. The author does not reveal her home country but it was invaded by German troops during WWII.  In a desperate need to escape abuse she becomes separated from those she loves and trusts and lives on the streets or in terror of being abused yet again.

Her young life is a roundabout of finding happiness then being hurt or lost, over and over again.

After marrying an English naval officer she moves with him to England. His family adore her and she them. The welcome she receives fills the reader full of hope for her future happiness. It is not to be.

Although her in-laws suspect she is being abused by her husband it was not appropriate, in post war Britain to interfere between a husband and wife

The intertwining of Robinson’s life story with the background of history is undeniably gripping reading.

There are two points the author makes in her Preface that the reader should note. The spelling is British English and her thoughts and emotions are in italics.

My first thought when I read she had included her emotions in italics was “this is going to be annoying” It was anything but. I would not recommend this method for most authors. Robinson is a skilled writer and this way of clarifying how she was feeling at that moment of time draws the reader in; it felt like I was by her side all the way but powerless to help and support her.

I usually make notes when reading a book for review. It must be an indication of how engrossed I was when I barely made a note or highlighted sections.

This is an inspirational story that I highly recommend and look forward hearing that the author has released the second part of her trilogy.