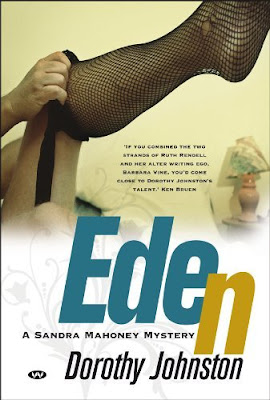 Eden is the third of a series of four stories about Sandra Mahoney; each taking place during a different season in Canberra, the capital of Australia. Eden is set during a hot summer.


Mahoney and her partner, Ivan, operate a security consultancy. Ivan on an overseas trip when a politician rings asking for a report on anti-censorship Ivan had completed just before his departure.


I had previously read “The Fourth Season” so was going backwards with Sandra’s story but I had enjoyed it immensely and looked forward to reading Eden. Unfortunately I was very much disappointed with Eden. It didn’t have the depth of storyline I had come to expect and in some places I had trouble following it.


Having said that, the story line is not boring and is heightened by Johnston’s wonderful expressive prose with vivid descriptions of picturesque settings one minute and frightening, tense and heart beating moments the next. She has an ability to reach the senses with sights, sounds and smells of each moment.


Johnston obviously knows Canberra extremely well; its climate, varying neighbourhoods and the road confusion to visitors. She uses this knowledge to paint clear pictures of her scenes.