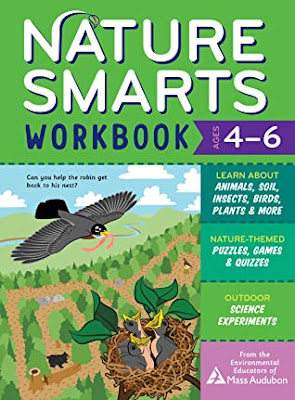 This is an excellent interactive book to teach children about their environment.
The variety of activities includes mazes, sums, and stickers as well as outdoor observation exercises to help the learn about animals, plants and insects.
I was pleased the illustrations were colourful, clear, in proportion and identifiable unlike many children’s books today.
Unfortunately, I reviewed an eBook version so was not able to see the double page spreads side by side or assess the stickers.
Four year olds will need parental guidance with many of the exercises. I feel the age group should be maybe 5-8 year olds.
It should be noted focusses on north American wildlife and therefore I am unable to recommend it for Australian children.
Thank you to Netgalley and the publisher for providing this book for an honest review.
My rating 4*

Posted by Random Jottings at 20:08 No comments:

The Lane Betrayal by John A Heldt 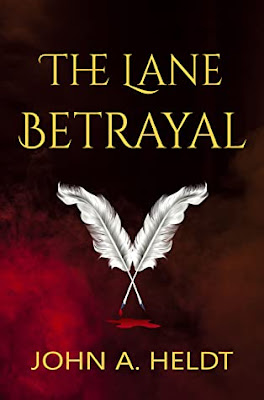 After finishing The Carson Chronicles, and loving the series, I wasn’t sure if I was ready to start another journey with another family. I should have known better. John a Heldt had me hooked from the first chapter. Who needs to do housework anyway?
Each of Heldt’s series uses a different method for time travel. In this series it is a time box developed by Physicist Mark Lane.
Mark discovers his business partner, Robert Devereaux, plans to use the timebox for his own greedy and evil purposes. With the help of a friend, he steals the time box, destroys the program, and whisks his to family back to 1865. They arrive just as the American Civil War is coming to an end.
His family includes his wife, Mary who has brought cosmetics from the present time to sell. His children are sons Jordon (ex-military) and Jeremy and daughters Laura and 12 year old Ashley.
They blend in with the time, making friends and fitting in as best they can. Laura volunteers at an army hospital.
But best laid plans can always go wrong. A key to one box is left in a farm building and the other is damaged. The second one is seized by the Union Army, suspecting it to be a device to aid the Rebel Army and Mark is arrested as a traitor.
That’s not the end of their troubles.
Devereaux wants revenge. His team builds another time box. He then sends a hit man, Silas Bain, back to 1865 to retrieve the original boxes and assassinate all members of the Lane family.
The cold hearted assassin has no qualms about who he kills including anyone who may get in his way or reveal his presence.
Meanwhile the Lanes, aware Bain is after them, desperately try to retrieve both their boxes.
The badies, Devereaux and Bain were easy to dislike. No, make that despise.
As always Heldt’s research is impeccable and his characterisation of historical figures including Abraham Lincoln and John Wilkes Booth are believable.
Two characters I particularly liked were Jane and Lewis. Both former slaves they are now free, but the Lane family know it still will not be easy for them in post-civil war times.
I have loved John A Heldt’s writing since the first book I read. I didn’t think his story telling could get any better, but it does with every new book.
He manages to combine dramatic action, adventure, and plenty of twists with love, endearing family relationships and friendship. It’s like a tapestry woven on a background of history featuring believable historic figures. The result is an engrossing page turner.
In The Lane Betrayal he includes the issues of the American Civil War and the abolition of slavery.
Each Chapter is told from a different character’s point of view, including Devereaux and Bain. It builds suspense, switches the emotions of the reader, and makes it a fast paced story.
When I first started reading John A Heldt’s books I thought they couldn’t get any better. How wrong I was. I believe he must set himself a bar higher and higher with each series, and he achieves his goal every time.
Do yourself a favour, read The Lane Betrayal. You won’t be disappointed but be warned as with all Heldt’s series you’ll want to jump straight into the next book.
I received a complimentary copy from John A. Heldt for an honest review.

Posted by Random Jottings at 16:16 No comments:

The Unusual Abduction of Avery Conifer by Ilsa Evans 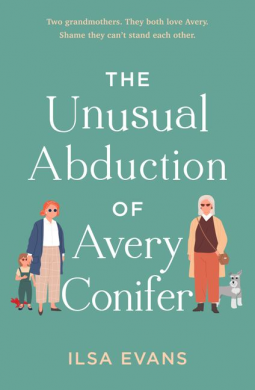 Shirley is contented with her life, even if a little too much wine helps. Of her three adult children, her favourite son, Daniel, is the least likeable and she makes excuses for his inconsiderate behaviour. That is, until he dumps his daughter, Avery, on her so he can date his new girlfriend. During bath time she notices bruising and a cigarette burn on the little four-year old. She decides to act.

Beth is the other grandmother. Her daughter, Cleo, is Avery’s mother. She is separated from Daniel and serving a four month prison sentence after several AVO violations. Beth visits her daughter regularly but is surprised when she learns Daniel has not taken Avery to visit Cleo for several weeks.

Shirley is often a bit of a ditherer but must choose between getting Daniel even more offside or putting Avery first.

The unusual action Shirley takes, with Avery and her 89 year old mother, Winnie, in tow, is to consult with Beth. Unusual because the two quite different grandmothers can’t tolerate each other. Yet, both grandmothers share a love for their granddaughter and are concerned for her wellbeing.

They agree the only solution is to take Avery away and stay in hiding until Cleo is released from prison. Beth’s dog, Harthacnut, joins the odd trio on their adventure.

This is where Beth’s organisational skills come in and before long they are disguised and on the run until Cleo is released from prison in six weeks.

Yes, the basis behind the story is child abuse but it is dealt with sensitivity and without graphic descriptions. It is the trigger for the main storyline.

Not only do they need to successfully stay hidden from the police, but they need to somehow get along for Avery’s sake who always remains the focus of their love.

During the initial stages of their confinement there is tension and discord between the two women, often added to by Winnie’s sharp retorts. Over time, as they open up more to each other, they begin to appreciate each other’s positive attributes and tolerate the negative ones. There are many humorous moments in the banter of all three.

89 year old Winnie is a lesson in not underestimating the elderly. Although the young members of her family consider her senile. She is wise and witty, sassy, and sneaky. She speaks her mind and is tech savvy.

The story is told through the point of view of the characters giving us more insight into their personalities and life experiences. It helps us to understand them better. Those we meet in this way includes the police, media, and other family members.

Every character is real, they may have faults, but they are true to characters we meet every day.

Two grannies, a great grandmother, a miniature schnauzer and 4 year old Avery on the run from police and the media. Shouldn’t be hard to find them – or is it?

The police issue an Amber Alert on Facebook and believe it will be resolved quickly but as time goes on they get frustrated at being outsmarted by two grannies.

Meanwhile the media, in particular a morning chat show, are having fun with the situation.

The underlining, and important, issues discussed within the story include women’s perspectives of life on a variety of topics.

However, these serious topics are skilfully intertwined with many humorous moments.

Overall, I thoroughly enjoyed reading the adventure of the grannies.

As a 72 year old grandmother of a 4 year girl I could relate to the main characters, their faults and their attributes and can honestly say they are true characterisations.  Would I do the same ting under the circumstances? If I had the resources these ladies had – probably.

This is the first book I have read an Ilsa Evans book and will certainly be keeping a lookout for more.

Thank you to the publishes for pre-approving me for this book.

Posted by Random Jottings at 18:42 No comments:

Birds and Angels by Will Lowrey 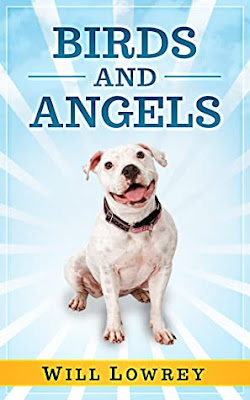 Birds and Angels is a short story based on the story Chasing Blue Sky featuring pit bull puppy Toby. (see my review https://pambookreviews.blogspot.com/2018/12/chasing-blue-sky-by-will-lowrey.html)

It is the story of Toby’s mother and how she is saved from a neglected life living at the end of a short chain.

It is a beautifully written story of love and dedication by her rescuers.

Although this is only short, I recommend reading chasing Blue skies first.

It is available free from the publisher's website http://lomackpublishing.com/


Posted by Random Jottings at 23:52 No comments: