The Old Razorback Road: Life on the Great South Road between Camden and Picton 1830-1930 by Elizabeth Villy 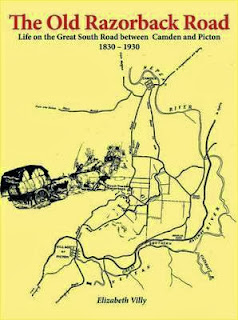 The Old Razorback Road by Elizabeth Villy is better described in its subtitle “Life on the Great South Road between Camden and Picton 1830-1930” than in its title. The Old Razorback Road links the neighbouring towns of Camden and Picton but the fortunes of the towns often varied. This book describes life in the towns and their changing fortunes; towns linked by a road that had its own fluctuating fortunes and dramas.

Elizabeth Villy is a well-known local historian and although this is primarily a ‘local’ history, because of the importance of the district in the early history of NSW, it is like having a magnifying glass on NSW and seeing the detail what life was like in Australia’s first colony over a 100 year period and governed initially by economic and social issues in Britain.

Elizabeth Villy’s creative writing style brings to life the characters, both heroes and villains that became so much a part of Australia’s history. It is an easy to read, and often amusing, style; neither superficial nor too academic.

We read history books about people and their impact, good or bad, on the growth of the nation. We read ones that tell of gold rushes and wars, towns and laws. Betty Villy’s book is about the life of a road built by convicts.

She clearly paints in words images of convicts labouring to build a road over that part of the Great Dividing Range called ‘Razorback’; aptly named for its steep ascent and narrowness. Add to that explorers opening up the inland, land falls and accidents caused by unstable ground and lack of government funding, official arguments, bushrangers, plagues of rabbits and weeds, droughts and floods, the coming of the railway.

The Old Razorback Rd was witness to and played an important role in the growth of NSW – its people, land use and finances but it was like an abused work horse; constantly returning a profit and leading the way but no care taken of it and little money spent on it.

My only disappointment with this book is that there is not enough of “Razorback”, once my home. After 1930 a new section of road was built to avoid the worst and most difficult section. This new section has also had an interesting history with its accidents, ghosts, the opening of a freeway and a truckie blockade. But that is a very personal view and it takes nothing away from the books readability and interest.